c2x and Lines and Points

Sometimes it is useful, if less pretty, to visualise data along a particular line. An example might be along a line joining two atoms to see if a particular band shows signs of an increase in density between the atoms (and so might be considered to be bonding) or not.

Check2xsf version 1.08 adds this functionality, and can output either raw data, or data suitable for Gnuplot. The end-points of the lines can be specified either as fractional co-ordinates, or in terms of the positions of atoms. The output can be simply raw data, with # introducing comments, or a valid (if minimalist) gnuplot command file.

The ethene molecule and its sigma-like orbits is considered again. 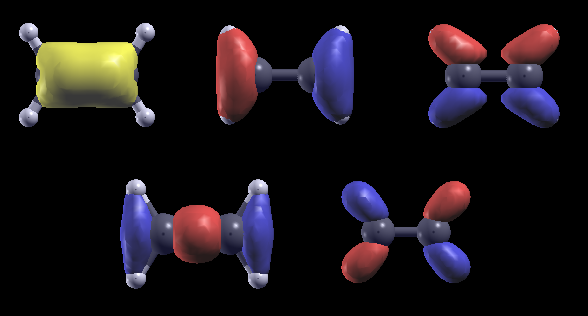 These wavefunctions can be plotted along the line joining the carbon atoms, and are plotted as densities here.

This requests the first five bands as densities, plotted along the path from carbon atom 1 to carbon atom 2, with 50 points, and with commands inserted to make the result a valid gnuplot file. This is then viewed with gnuplot. 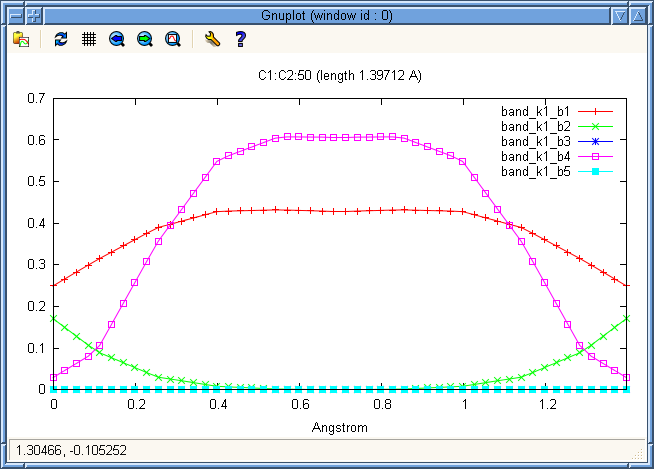 The first band is clearly bonding. The second seems to have a node half way between the atoms, the fourth is again bonding, but more tightly localised, and the fifth seems to have the whole of the line between the carbon atoms on its nodal plane. The third is not seen, so presumably it has the same density on this line as either the fourth or fifth and has been over-written in the plot. It can easily be determined that this is so, and, like the fifth band, it is zero at all points on this line. This fits perfectly with the 3D plots, in which bands one to three make up the top row, and four and five the bottom row.

To produce its output, check2xsf uses trilinear interpolation from the FFT grid. There are only about a dozen FFT points on this line, so there has been a considerable degree of interpolation. An alternative is FFT interpolation, and this should be preferable when bands and band densities are being considered. Check2xsf can also do this, with a specified new grid which must be denser, in all directions, than the original grid.

The above uses FFT interpolation onto a 100x100x100 grid, followed by trilinear interpolation. The output is very similar, but subtly different, most noticeably with the fourth band being closer to zero at the start and end of the line, and being smoother. 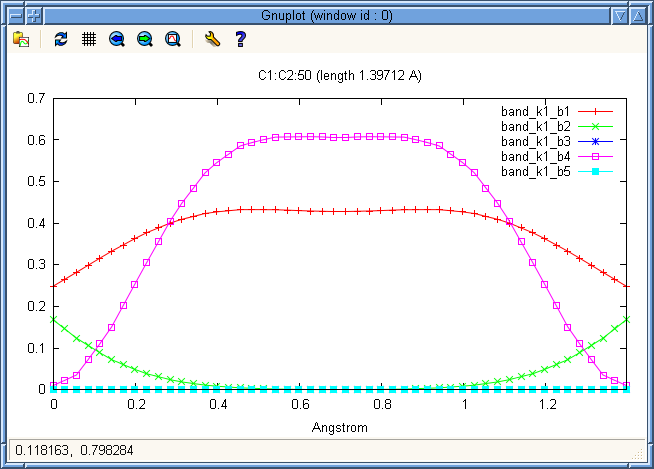 Finally, with more complicated systems it is important to identify atoms correctly. If -v is specified, the fractional co-ordinates of the line will be given to stderr, in a form such as


One can also specify fractional co-ordinates directly. The above examples can be expressed equivalently with which reveals that the line is, in some sense, backwards. You may need to put arguments containing brackets in quotes to prevent your shell becoming upset.

A very minimalist approach, at least for visualisation, is to request data at a single point.